This project is actually from September. It was shown at the 2013 Gates Leadership Society Reception, but I waited to post it, because the department also decided to use it as the holiday video. Although I’m now using Final Cut Pro X for all of my editing, this project was my first time using nesting in such a complex way in Final Cut Pro 7. It was extremely time-consuming, but I was very pleased with the result!

The still photos that appear in the scrolling boxes near the beginning were taken by me in front of the green screen, and I didn’t reduce the resolution before bringing them in to Final Cut; the original image sizes were 4272 x 2848. That was a huge mistake, as every time I made a change (of any kind, small or large–from fully replacing a clip to nudging a photo one pixel to the left) to that nested sequence, the rendering took HOURS, and as I mentioned in a previous post, automatic background rendering is an incredible feature in Final Cut Pro X, but it’s not available in Final Cut Pro 7, where “rendering” simply means “waiting.” It was an incredibly frustrating experience. There really are no words to accurately portray how much this production took out of me, but those closest to me are well aware!

I’m especially proud of this video not only because of the immense amount of time it took, but also because it’s truly mine from the concept. I certainly had input on the content of the other videos I’ve produced for the Advancement department (especially this one), but this is how it typically worked in the past: I was given the script (words, phrases, etc. that should be included in the video), we would all agree on the people to be included, and I would organize (scheduling) and produce (filming). Then during the editing process, I would either add more to–or omit from–the script, based on the flow (or lack thereof) of the video. I used my creative “gut” to make decisions based on what I was given. This production, though, was completely mine from conception. 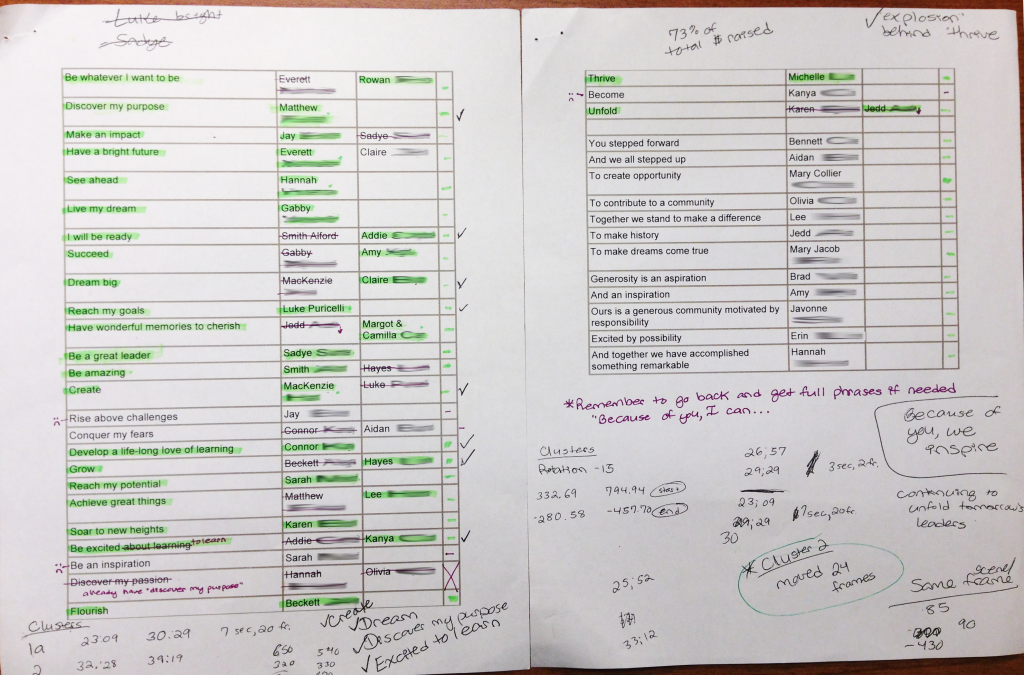 The star of this video, obviously, is the little boy at the very end. For the life of me, I couldn’t get him to cooperate, but sometimes, those make the best shots! I’ve learned to keep the camera rolling at all times, which is how I got those great shots of him pointing to the camera. If I recall correctly, I may have gotten him to say, “because of you” once or twice, but he barely whispered it. He just didn’t want to do much talking, and even when I asked him to just point at the camera, that was done in a “shy” way, but I really couldn’t have asked for a better outcome! So of course I used him as the video “cover” to get the attention of our audience in the broadcast email and on social media. Below are just two shots of the video screen; I went with the first one, but spent more time than usual playing around with it in Photoshop, because I usually place the play button in the very center, but it would have covered his face.